HOW TO GET AN IVC FILTER LAWSUIT LOAN

CLICK TO GET YOUR IVC FILTER Pre Settlement CASH NOW!

HOW TO GET A IVC FILTER LAWSUIT LOAN

Have you experienced blood clots, device migration, organ damage, or a number of other severe medical conditions

Unfortunately a lawsuit, can’t bring back your health and wellness. But knowing about several other IVC filter lawsuits occurring around the country may help you feel you aren’t alone. It may also help to know there is accountability in the lawsuits filed against several manufacturers and brands of IVC filters.

Many of these manufacturers and brands of the IVC filter are facing class-action and individual lawsuits. Read on to learn more about the status of some of these lawsuits. The latest updates on the IVC Filter Lawsuits are also being shared below, along with other relevant details you may find of interest.

IVC filters were placed in an estimated fifty thousand patients a year in the hope they would prevent pulmonary embolisms. Some of these devices caused medical conditions that put patients at unnecessary risk of severe health consequences. Those affected suffered from tragic medical complications that required immediate removal of the IVC filters. 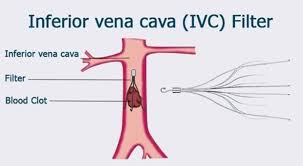 Many of these affected individuals were left with severe side effects even after the removal of the IVC filter. The Inferior Vena Cava (IVC) Filter is a small medical device that’s implanted into a large vein that receives blood from the lower parts of your body. It’s designed to deliver blood to the right atrium of the heart, and the heart pumps the blood to your lungs.

The IVC filter design was to ensure if there were any blood clots, they were caught before they got to the heart and lungs. The IVC filters started having problems right away, and according to court documents, each of the manufacturers and brands knew their product was defective. Yet all continued to sell them to doctors and patients without letting them know about the risk.

Then more lawsuits were filed. There were so many lawsuits being filed a federal panel had to combine lawsuits against each company and put them into multidistrict litigations (MDLs). It was the only way to move forward with the lawsuits while making sure plaintiffs were represented throughout the legal process more efficiently.

If you are worried about your symptoms and had an Eclipse, TrapEase, OptEase, Recovery, or Celect Brand IVC filter then you need to contact an attorney today. Many patients of these IVC filter brands have had loved ones die from complications or suffered severe complications themselves. Plaintiffs are currently being awarded millions in some cases from their IVC injuries.

Injuries and Symptoms of IVC Filters

Many of the injuries are listed below, so review them to see if you are having any of symptoms associated with the defected IVC filters. The symptoms and injuries include:

You can also suffer from a pulmonary embolism. It’s believed by IVC filter attorneys there may be thousands more who can and will file suit should they suffer a medical complication or injury from their IVC filter.

There are times no matter our intentions that if we’ve been injured by a medical device or procedure, we want to work but can’t. If you’ve been

injured by an IVC filter and these injuries or symptoms have prevented you from going to work, there is a way forward. You may even be able to get the funding you need to help pay some of your medical or day-to-day living expenses while you can’t work.

There are no bills that wait for you to recover, and you have new bills every day just by turning on your lights or needing food to get you through another pain-filled day. If you have a lawyer representing you in the IVC filter lawsuit, you don’t have to wait to receive the lawsuit settlement. You don’t have to wait to see if your lawsuit goes to trial either.

The difference is you can get your money when you need it most, which is now. A lawsuit pre-settlement loan is worth its weight in gold in alleviated financial stress. There’s even same day lawsuit funding available to you.

Your Next Step Needs To Move You Forward

If you don’t have an attorney you need to hire one soon. There are times even the best lawsuit goes past their statute of limitation time frame

. The statute of limitations time frame expiration applies to a person who waits too long to file their lawsuit. Attorneys recognize some of the symptoms and injuries aren’t always clear right away.

Take your first step to reclaiming your life, and reach out to us when you’re ready to start moving forward again. IVC filter has already taken so much from you. Don’t let them take anymore.

We can help you, but you have to take the first step.

HOW TO GET IVC FILTER PRE SETTLEMENT FUNDING

CLICK TO GET YOUR IVC FILTER PRE SETTLEMENT FUNDING NOW!

HOW TO GET IVC FILTER PRE-SETTLEMENT FUNDING

risks. Are you worried that your IVC filter might be defective? Learn how to get cash now for your injuries.

Have you had an Inferior Vena Cava (IVC) Filter placed to prevent a pulmonary embolism? It is estimated that 50,000 patients a year have IVC filters placed. An IVC filter is a small medical device that is surgically implanted into a large vein that receives blood from the lower part of the body. The vein, the inferior vena cava — delivers blood to the right atrium of the heart and the heart then pumps the blood to your lungs. Inferior Vena Cava filters are supposed to catch blood clots before they travel to the heart and lungs.

The problem is that IVC filters may not work very well. A recent study published in the New England Journal of Medicine indicates that these filters do not reduce the incidence of pulmonary embolism after being placed. The researchers found no benefit of IVC filter placement after trauma for most patients.1

Additionally, these devices are often defective and cause serious complications and even death in some cases. Since 2005, there has been a high number of adverse reports related to IVC filters. In 2010 the Food and Drug Administration (FDA) issued a warning about the risk of IVC filter complications. In 2014, they issued another warning indicating that these devices have a high risk of failure.

Defects in the design of these filters make them likely to migrate or break off. This can cause them to damage the inferior vena cava and other internal organs. Additionally,

Patients have suffered immense physical and emotional pain and suffering because of defective inferior vena cava filters. Houston firefighter Jeffrey Pavlock had his IVC filter break off. Pavlock was awarded $1.2 million after he experienced perforations in both his blood vessels and organs from his IVC filter.3

In other cases, the material would travel to the lungs, heart and other vital organs causing serious injury or even death. This happened to an Indiana woman after she had an IVC filter implanted. The woman, Tonya Brand, was awarded $3 million in damages from an Indiana jury after her IVC filter broke apart and caused severe internal injuries.4

What is even more shocking is that it appears that at least one manufacturer knew that their IVC filter was defective and had resulted in 27 deaths and many more complications. Instead of immediately taking it off the market, they simply replaced the device with another version that had similar fatal flaws.

In an expose on the issue, NBC News obtained confidential company records from medical device company C.R. Bard. The records showed that the company knew about failures related to its IVC filters and they were also aware that the replacement filter had design defects. In fact, within four months of putting the new filter on the market, C.R. Bard,learned of failures. In spite of this, C.R. Bard kept selling the devices.

Because of the defects and cover up by at least one company, more than 10,000 people have filed lawsuits against C.R. Bard Medical, Boston Scientific, Cook Medical and other manufacturers after having been harmed by a defective IVC filter. The lawsuits have finally prompted the companies to remove some of the devices from the market.

If you’ve had an Eclipse,,TrapEase OptEase, Recovery, or Celect Brand IVC filter manufactured by Cook Medical, C.R. Bard Medical, the Cordis Corporation, or Boston Scientific, and you have experienced problems after having one of these devices implanted, or a loved one has died from complications related to these filters, you should contact an attorney to determine if you might be eligible for compensation. Plaintiffs have been awarded millions of dollars for IVC injuries. Some of the most common injuries associated with defective IVC filters include:

How Long Does It Take To Win An IVC Lawsuit?

The length of time that it takes for an IVC lawsuit to settle depends on a variety of factors. However, these cases require significant amounts of research into your medical files before the case even goes to court. Therefore, it could take months or even years to settle your case.

Is It Possible To Get The Money Sooner?

If you’ve been injured by an IVC filter, your injuries may have forced you to be out of work. You may have trouble paying your hospital bills, rent, or mortgage. While the great news is that you might be able to recoup money that you desperately need to pay your bills, the bad news is that it could take a while to see the money in your bank account. All the while, your bills continue to pile up.

Fortunately, you don’t have to wait around until your lawsuit settles to get the money. If you have a lawyer, you can get cash now with an IVC filter lawsuit pre-settlement loan.

What Is An IVC Filter Pre-Settlement Loan or Lawsuit Cash Advance?

To get pre-settlement funding, you must have a lawyer working on your case. Pre-settlement loans are risk-free and don’t require an upfront fee. If you don’t win or settle your case, you won’t be required to pay back the money.

If you have hired an attorney and you are ready to get your IVC lawsuit money now, contact us today. There is no credit check to apply for a pre-settlement loan. These loans are risk-free and you could have your money in as little as 24 hours after you apply. It’s easy to get started online today.

APPLY FOR A LAWSUIT LOAN NOW

CLICK HERE TO SEE MORE TYPES OF CASES WE FUND